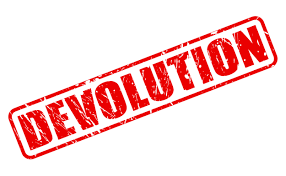 Devolution is the transfer of power from a national government to subnational (e.g., local, regional or state) authorities. Devolved regions have the power to make laws relevant to the area. There are several ways in which devolution helps to improve the economy.

In many countries, economic activity is concentrated in a few large cities. Having all economic activity in one area limits the range of services and industries in which a country can excel. Not even the largest city can do every activity.

Centralisation has many drawbacks related to the people’s inability in departmental offices in large cities to know adequate detail about local economic issues. Whether it is particular problems facing regions whose inhabitants are struggling with various deprivations and problems, or skills needed of local employees, the information required to address the challenges is only available locally. It is reasonable to believe that national economic growth would improve if each region is able to grow faster in its area of specialism.

Growth in various regions does not occur spontaneously because the political and physical infrastructure has not been available for more geographically balanced development. Market forces take activity and people towards certain regions because they operate within policies controlling them in that direction. Therefore, devolution of powers to improve other cities is key investment decision to improve all regions.

Discrimination of women is caused by laws that either prevents economic freedom of women or the absence of laws that are meant to protect women. Unfortunately, in many countries, women have no freedom in their professional lives. Instead, government or husbands make their decision on whether to work or how to work, for them.

In at least 15 countries in the world, a wife can be prevented from working by her husband. These countries include Sudan, Niger, Mauritania, Guinea, DRC, Chad, Cameroon, Syria, Kuwait, and Jordan. Also, many of these countries have laws that require wives to obtain their husband’s permission before holding a national identity card, travelling outside the country, applying for a passport and traveling outside the home. These are things that are needed by women who want high-powered careers. Without them, their careers are at risk.

In countries where husbands don’t have control over their wives, the state always steps in. In many countries, the state restricts the kinds of jobs that women do. Banned jobs are seen as harmful to the moral character of women. For instance, women are blocked from over 456 different jobs in Russia.

The transparent and stable government built on rule of law and respect for human rights tend to foster settings that are favorable to the establishment of unhindered operation of private businesses. This is clearly shown in the Freedom House’s Freedom in the World report and the World Bank’s Doing Business survey.

Governments that oppress people are more likely to restrict business opportunities. According to Doing Business, regimes that do not uphold human rights build trade barriers, impose more red tape, and fail to enforce contracts. Most authoritarian governments breed corruption and arbitrary decisions because of lack of checks and balances. Most oppressive governments are also more vulnerable to political conflicts than democracies because they limit nonviolent changes of government through elections. All those traits are not helpful to businesses.

Major democracies of Europe, North and South America and South Africa promote regulatory systems that are as transparent as their political systems. Consequently, their economies keep growing. It is evident that democracy is not the only factor that promotes good economic performance but also provides a corrective mechanism and long-term political stability that establish a foundation for steady growth and safe investment.

Student loan has become one of the largest categories of consumer debt in many countries. While other forms of debt declined after the Great Recession, student-loan debt has continued to grow. Many people in developed and developing countries owe their governments money burrowed to fund their higher education. The loan burden has made harder for millions of people to make ends meet.

The problem of student loans is the result of purposeful policies by and on behalf of people who profit from such loans. Although student loans give many people access to college and university education, they retain a system in which higher education institutions funnel money from taxpayers and students into the pockets of college administrators, private and semipublic institutions, and banks. The policy-makers who help to create this system and maintain it get significant contributions from the individuals and institutions that profit from it.

Student-loan debt mirrors the inequalities that exist in the society. Poor people and young people are more likely to take student-loans. Paying back principal and interest of this debt contributes to poor people falling further behind richer individuals who are less likely to have debt.